As a first round Cybils judge, I have had the opportunity to read some of the best books published this past year for young readers. It is important to note that many of the books included diverse characters. Children need to see others like themselves in the pages of the books they read. Today I am sharing five diverse books nominated for the Cybils Award in the chapter book category. The Cybils winners will be announced on February 14th.

Juana is a spunky character who loves her home in Bogotá, drawing, and her “amazing perro,” Lucas. What she doesn’t like is learning to speak English – it’s too hard! Juana & Lucas  helps the reader to understand the experience of a child struggling to learn a new language. It also shows how doors are opened when one is able to communicate with others. The book is sprinkled with Spanish vocabulary that is easily understood through the context and illustrations. The kid friendly drawings make this early chapter book extra lively and fun. Juana & Lucas will appeal to multicultural readers who are interested in learning about children from other countries.
Juana Medina was awarded the 2017 Pura Belpré Author Award for Juana & Lucas.

When Freddie’s super-powered sneakers become too tight, inventor Mr. Vaslov makes him a new pair just in time for his trip to New York. Freddie and his mom are on their way to see Uncle Jorge and are asked to deliver an important package for Mr. Vaslov. When packages are mixed up, Freddie uses his super powered zapatos and wristband to find missing items and get important documents and an engagement ring back to the rightful owners.
Freddie is an energetic and clever boy who will appeal to young readers. Spanish is sprinkled throughout the text, the eight chapters are short and snappy, and the illustrations break up the text in just the right places. It is really nice to find a fun series featuring a young Latino. 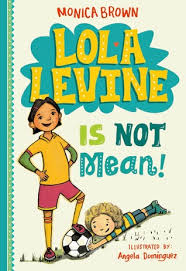 Lola Levine Is Not Mean! By Monica Brown (author) and illustrated by Angela Dominguez
Little Brown 2016
Chapter Book  for grades 1-4

Second grader Lola Levine is a good athlete who loves soccer. Unfortunately, the other kids don’t want to play with her because she accidentally injured another student. In fact, they start calling her Mean Lola Levine. Lola shares her feelings in her diary and comes to realize that her words and actions can hurt others. Lola is half Jewish and half Peruvian and the traditions and culture of her family provide an interesting background. This is the first in the Lola Levine series which will appeal to children who enjoy sport and school friendship stories. 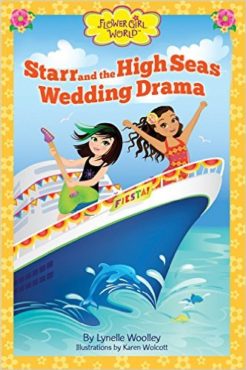 When Abuela extends an invitation for a cruise to Starr and her family, Starr is thrilled. She soon learns that Abuela is in love with Walter who will also be on the cruise with his family. Starr is thrust together with Walter’s granddaughter, Ivy. The girls don’t have much in common, however, except their doubts about the marriage. They decide to test the couple to see if they really are a good match.

This is the third book in the Flower Girl World series which shares the teamwork and fun involved in being a flower girl. The diverse characters will appeal to girls who love to make new friends and enjoy wedding festivities.

Sofia Diaz has the opportunity to accompany her father on a business trip in Brazil. When the rickety boat they are in breaks down on the Amazon, she has to face her fears of crocodiles, piranhas, and anacondas. She meets a girl named Julia who wants to grow up to be a ranger. Together they explore the rainforest where a noisy toucan won’t leave them alone. They finally follow the bird who leads them to pink dolphins that have been captured by poachers. The girls are able to outwit the poachers and bring them to justice.

The Mystery of the Trouble Toucan is an action packed book with information about the region’s geography, flora, and fauna, woven into the fast paced story. This is one of  a series set in different regions of the world which will be enjoyed by those who like adventure. The book’s back matter includes additional geographic information, a recipe, common Portuguese words, and resources for further study.

If you want a list of some really great children’s books, head over to the Cybils’ website.

The Cybils Awards aims to recognize the children’s and young adult authors and illustrators whose books combine the highest literary merit and popular appeal. If some la-di-dah awards can be compared to brussels sprouts, and other, more populist ones to gummy bears, we’re thinking more like organic chicken nuggets. We’re yummy and nutritious.