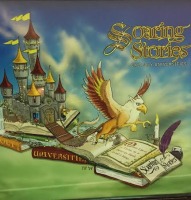 A few months ago my daughter, Roxanne, suggested that we go and decorate the Rose Parade float built by the students at the Cal Poly Universities. I’m always ready for a field trip so we signed up. Unfortunately, Roxanne was scheduled to work on campus so my brother, John, joined me. We kept asking ourselves why, since we grew up near Pasadena, had we never worked on a float?

The Pasadena Rose Committee announces the theme in January and the students hold a contest to choose the design. The theme for the 126th Rose Parade is “Inspiring Stories.” The Cal Poly students chose “Soaring Stories” as their theme interpretation. How perfect is that?

The students work for nearly a year to make this float. Engineering students work on the mechanical parts. The students grow flowers and fund raise to put this amazing work of art together. They wear union suits with this cool logo:

They even set up a shop to help earn money for this huge project. Carrie designed this patch:

Deco week is when students, alumni, parents, and friends go to the tent set up near the Rose Bowl to decorate. 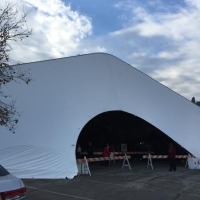 The students are organized and ready for volunteers. My brother and I put Christmas tree boughs on the sides and seaweed on pool noodles to make the binding of a book. 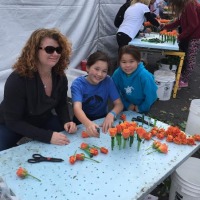 The float must be completely covered with plant material. It is amazing what materials are used:

and tons of flowers of many varieties 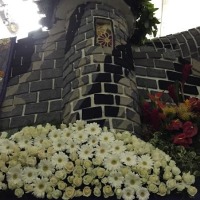 It takes a lot of time and patience to do the detail work. 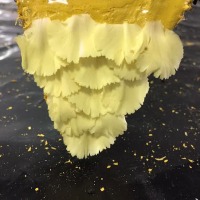 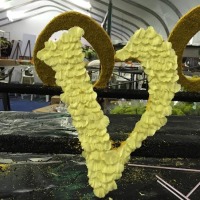 The Griffin will be soaring on toward Orange Grove tonight for its New Year’s trip down Colorado Blvd. in Pasadena. It will be near the end of the parade so be on the lookout for it if you watch it on t.v.

Happy New Year and may your year be filled with inspiring stories!

For the 53rd time since 1949, the only student-built float earned special honors at the 126th Tournament of Roses Parade held New Year’s Day. “Soaring Stories” won the Lathrop K. Leishman Trophy for the most beautiful non-commercial float.

“A lot of texts have been flying. Everybody is excited,” Josh D’Acquisto, Cal Poly’s Rose Parade float advisor, said two hours before the parade began. “  ‘Boy Scouts will be front of the float,’ is what we always say. If you win a trophy then there are Boy Scouts out in front of your float carrying a banner. You always want to be led by the Boy Scouts.”

You can read the entire article here: http://www.calpolynews.calpoly.edu/news_releases/2015/January/2015_Rose_Parade.html