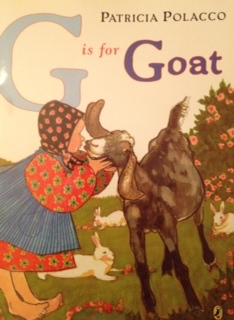 Who doesn’t love goats? My children raised them for a number of years and faithfully milked them twice daily. We used the milk to make cheese. The goats were friendly pets and did a great job keeping the weeds down in the pastures. The children took the kids to school to share for “show and tell” – our goats were very used to children and seemed to be happy when around them.

One of our favorite authors is Patricia Polacco who also has a special fondness for goats. Many of her books feature goats. In fact, she has written and illustrated a beautiful book titled G is for Goat. This is a rhyming alphabet book which begins “A is for Apple, the best treat of all, B is for Billy, what boy goats are called. This is a fitting book for the A – Z blog challenge. 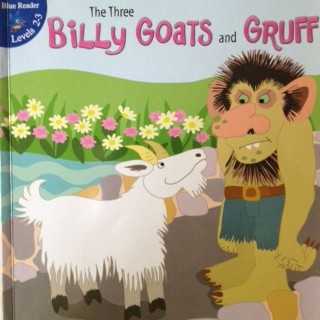 The Three Billy Goats Gruff, is a familiar tale. It is a good story to have children act out using sounds to make the noises when the goats cross the bridge and also to use different voices for the different characters. It always did seem a bit violent, however with all the threats of poking from the troll and the biggest goat pushing the troll off  of the bridge. I was happy to find another version of the tale called The Three Billy Goats and Gruff written and illustrated by Robin Koontz. In this version, the three billy goats have to deal with a troll who would cross the bridge and yell “I want you all for dinner!” After a number of funny interactions, it turns out that the troll really just wants to invite the goats over for dinner because he is a fantastic cook. This is a delightful tale which the students can act out and compare to the traditional version.

« F is for a Farm Day Field Trip.
G is for Goat Festival »