Well, globe trotters, let’s zoom on over to India and read: 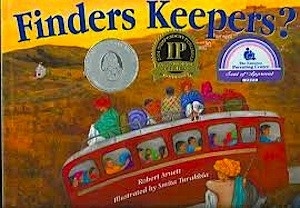 Author Robert Arnett is a frequent traveler to India. In fact, he has written a travel guide called India Unveiled. In Finders Keepers, he writes about a fascinating journey he took in Northwest India.. He was riding a crowded bus over a bumpy road to Mt. Abdu in Rajasthan. The bus was filled with men, women, and children who packed inside. There were more people than seats, so some brave boys and men rode on top of the bus. Instead of complaining, people laughed and talked as though they were one big family. They stopped and shared food in the countryside where bats hung from the trees. One man even took off his turban to reveal his lunch of flat bread called chapatis sitting on his head. 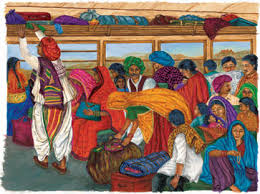 While shopping, the author felt a tap on his shoulder. He turned to see an Indian boy holding out his wallet that he had dropped while shopping. Arnett opened his wallet and tried to give the boy a reward for his honesty but the boy refused. The author found a translator and tried again to reward the boy who once again refused. The boy said that he didn’t understand why he should be rewarded because returning the wallet was the right thing to do.

Finders Keepers? is the best sort of travel book. It is explores the geography, language, art, and food of India. The culture and people are described in a positive and respectful way. It gives us much to think about and is a good starting point for a discussion on honesty and making good choices. The pictures are painted in glowing color and show the beauty of India. Arnett includes a glossary of terms and vocabulary. It is evident how much he appreciates India. This is a wonderful geography book which introduces us to a vibrant culture and makes us remember that it is always best to do the right thing. Namaste. 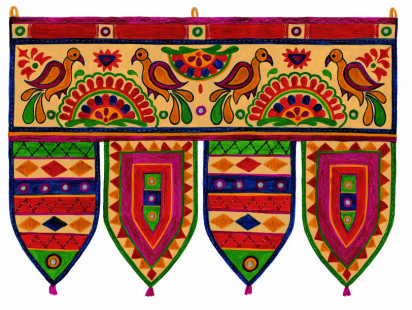 This is a illustration of a toran which are hung over doorways to welcome God and guests.