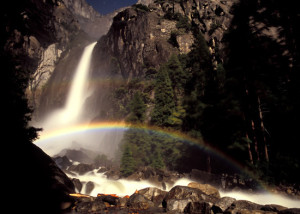 There are many pluses to living in California, one of which is the close proximity to Yosemite. Some of my earliest memories are set in Yosemite. I have been there in all seasons of the year and so far, all the seasons of my life.  I camped and hiked there with my family during my childhood. I even remember the evening  firefalls made by the rangers. As a teen, I spent a week there with the Yosemite Institute. In college, I found myself there with friends hiking the Little Yosemite Valley and I had one of the most terrifying times in my life when my dear friend, Carolyn, and I got lost at night in the winter wilderness while trying to cross country ski into Lake Ostrander. (The ranger told us to wait to go but we didn’t listen). Fortunately, we lived. I’ve been to weddings in Yosemite and spent many romantic evenings with my fiancee and now husband, Michael.

But, I had never seen a Moonbow. I had heard of this elusive natural event but knew the timing had to be just right. The naturalist John Muir wrote about the moonbow in the 1870’s. He called them lunar spraybows . They are also known as a lunar rainbow and only happen under certain conditions.

Recipe for a Moonbow

My husband knew that this was high on my “to do and see” list and the full moon in May just happened to be on my birthday! So, we loaded the bicycles and headed to Yosemite. We spent the day riding and hiking, had a wonderful dinner at the Ahwanhee, and dressed warmly for our evening adventure.

We had asked just about every official looking person about the moonbow. We were given different times and some even said there wasn’t enough water in the falls due to the current drought. The moon rise was listed at 9:16 pm but it actually takes a long time to rise over the mountains. The best source of information turned out to be a nice guy at the Yosemite Institute desk in the Visitor Center. We were told to be there at 11:16.

The best place to catch the moonbow is at the viewing terrace at the base of Yosemite Falls. There were lots of photographers there as this must be on the bucket list of every photographer. They were a great group, cheerfully helping each other figure out things that were way beyond my scope of imagination.

Finally, the moon crept over the cliffs and shone directly on the falls. There was a hush and WE SAW IT! A moonbow does not look like a rainbow to the naked eye. It looks like an ethereal line of chalk drawn across through the mist. A ghost of a rainbow. Delicate and lovely.

Our new photographer friends, however, had a different view. They kept the lenses of their cameras open for thirty seconds and were able to capture the full spectrum of the moonbow in all its glory – including stars in the sky! (The photo at the top of this blog is on the University of Texas website).

The best time to see the moonbow is during the full moon in April, May, and June. You still have time – the full moon will be this Friday.

I suggest you contact the Yosemite Institute to find out the approximate time.

Wear a jacket and turn off your flashlight when you get near the falls so you don’t disturb the viewing.

Here’s a great blog written by Jeff Stamer that has lots of great information about the moonbow including a map of the best viewing spots, what to wear, and photography tips for those of you who use cameras rather than than a smart phone: