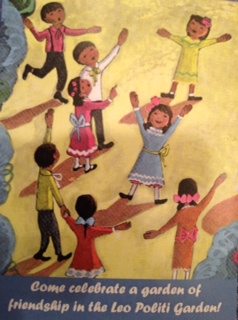 This is National Library Week so I am excited to blog about libraries! I began the week at California State University, Fresno which is the home of the Arne Nixon Center for the Study of Children’s Literature. Each year the Center Advocates hold a charming Secret Garden Party. The location is a secret until the day of the event and it is a celebration of children’s books and spring. This year was different because the day was devoted to celebrating the completion and rededication of the Leo Politi Garden located outside of the Fresno State Library.

Arne Nixon was a beloved Children’s Literature professor at Fresno State.He was a remarkable storyteller who impacted thousands of teachers. He was friends with many authors of children’s books, most notably, Caldecott winner Leo Politi. It was an honor to have Leo Politi’s son Paul Politi and daughter, Susan Politi Bishof in attendance. The garden contains statues based on Leo Politi’s characters, tiles he designed, a fountain, and beautiful plants surrounding areas to sit and read.

You can visit the center – call first to make and appointment. https://www.arnenixoncenter.org

It was wonderful to spend the day with some of my author friends. 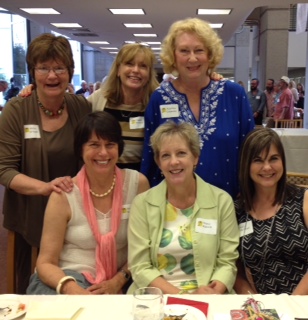 Back row: Alexis O’Neill (see yesterday’s K is for kite post) me and Angelica Carpenter (Curator emeritus of the Arnie Nixon Center).

I have always gravitated to places where there are books. Libraries were my home away from home. Realizing that I liked books and children, I decided that I needed a career that encompassed both. I earned my Masters of Library Science at USC and worked first at the Santa Barbara Public Library and then the Goleta Library.

I visit my local Kingsburg Library at least once a week. I would hate to think of a world without libraries. Join me in supporting them.