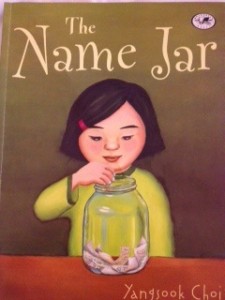 In The Name Jar, a picture book written and beautifully illustrated by Yangsook Choi, a Korean girl has a special name, Unhei. Her parents even consulted a name master when choosing her name. When Unhei and her family prepare to leave S. Korea, her grandmother gives her a wooden “chop” which has her name in Korean carved into it to take with her.

On Unhei’s first day riding the bus to school, some children mispronounce and then make fun of her name. Embarrassed when asked her name in class, Unhei tells her classmates that she has not chosen a name yet. The students think this is curious but get excited about helping her choose a name. She is given a ” name jar” in which the children deposit name suggestions. With the help of a kind boy in her class, Unhei chooses a name – her own.

The Name Jar is an excellent book which helps students understand the difficulties that immigrants must deal with as they assimilate into a new culture. It also introduces information on the S. Korean culture. I have used this book with kindergarten through sixth grade students. It is a rare book that can be used and enjoyed by such a broad spectrum. This book is a springboard for discussions in identity, immigration, and respect for cultural differences especially in our multi-cultural classrooms.

After reading The Name Jar, i ask the students to find out how they were named and what their name means. The children have shared such sweet stories. We always follow up with creative art project that celebrate their names.

Names are important. As parents of four children, two adopted internationally from South Korea, we put great thought into naming our children. We had a hard time agreeing on our first born daughter’s name. We almost left the hospital without naming her. With our adopted son and daughter, we had to decide whether or not to keep the names they had been given in Korea. This is an area of great debate in the adoptive community. With our youngest daughter, the entire family became involved in naming her.

« M is for Missions
O is for Olvera Street »