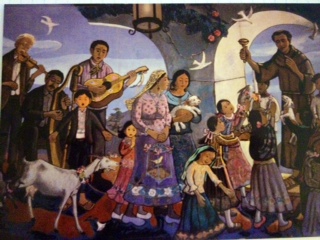 This has been a week to celebrate the art of Leo Politi!

Olvera Street is in the center of downtown Los Angeles. In fact, it is in the area where the City of Los Angeles was first established. Olvera Street is a tourist location – that is why it was created. It may be a bit kitschy but it is fun. As children, we went to Olvera Street to have lunch and wander around the shops. Now you can even take the Metro to get there.

I think it is worth a visit to Olvera Street even if it is just to see the mural, “The Blessing of the Animals” painted by Leo Politi between 1974 – 1978. The Blessing of the Animals is a yearly event which is held on the Saturday before Easter. Leo Politi wrote about the procession in his picture book, Juanita. This sweet story tells  of a young girl whose parents run one of the small shops on Olvera Street. She is given a dove for her birthday and then is able to join the blessing procession at the Old Mission Church.

Here is a link to information about The Blessing of the Animals ceremony:

The Blessing of the Animals continues! This year it will be held on April 19, 2014. Here’s the official invitation: 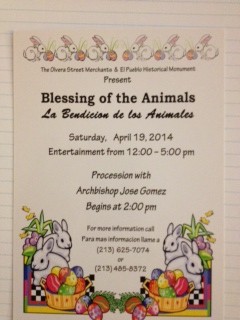