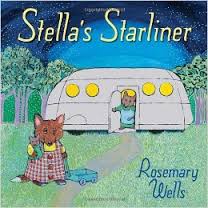 Rosemary Wells is one of my favorite authors and her books have a special place in our classroom library. I was thrilled to discover her latest book, Stella’s Starliner, not only because I love Rosemary Wells but because I have a secret longing for a Silver Airstream Trailer.

Stella’s Starliner
written and illustrated by Rosemary Wells
Candlewick Press, 201
picture book
Stella and her mother live in a Starliner that is as silver as a “comet in the sky.” She has everything that she needs including a room for sleeping, a room for being awake, and a sofa that turns into a bed at the touch of a button. Her father comes home on Saturdays in his truck. The weekend is special and he returns to work on Sunday night.
Unfortunately, some weasels come by and make fun of Stella’s home saying it is like a tin can. They even say that she is poor. Stella is mortified – “their words sung Stella’s heart like the stings of bees.”
She finally explains what is wrong to her mother and magically her father’s truck is hitched to the Starliner and they fly through the night to a new place near a big house. The bunnies who live there are enamored with the Starliner and ultimately, Stella realizes how rich she is.
This book is wonderful on so many levels. The ending is very satisfying, Stella has everything she needs – her parents, her home and new friends.
The kindergarteners didn’t make a peep while I was reading but they sure had a lot to say when I was done. They are very black and white about what is wrong and what is right and the weasels were such bullies! We discussed how much words can hurt. The other thing about the book was that it addressed a situation where the father was gone most of the week. In this class, a majority of the children have parents who serve in the Navy. These children deal with long absences of a parent and this is the first book they’ve encountered that dealt with this subject.
The language in this book is beautiful – Rosemary Wells is able to describe emotions so well. I know that Stella’s Starliner will be read and reread frequently.
By the way, as a child I traveled with my grandparents with their travel trailer and then spent a great deal of time with my grandmother in her “coach” in a park. I have a fondness for trailers and know that these early travels were the spark that started my field trip life.

« R is for raising readers…
T is for Tea Time »

Look who made it to Perth, Australia! Thanks to @s

We’re counting down the days until the release o

Who wouldn't want to be in Hawaii? She's made it t

clairesfieldtriplife Evie is having a great time b