The Case for Loving – the Fight for Interracial Marriage written by Selina Alko.  Illustrated by Selina Alko and her husband Sean Qualls Arthur A. Levine Books 2015. 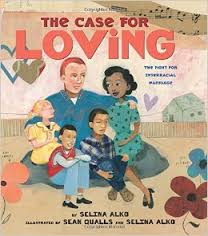 June 12th is officially Loving Day but do you know why?

In 1958, Richard Loving and Mildred Jeter fell in love. Of course they wanted to be married but there was a BIG problem. They lived in Virginia. Richard was white. Mildred, being of African and Native American descent, was “colored.” Unfortunately, Virginia was one of sixteen U. S. states where it was illegal for interracial couples to marry. Richard and Mildred had to travel to Washington D.C. to get married.

They returned home to Central Point, Virginia where, in the middle of the night, they were arrested for “unlawful cohabitation.” They spent a few nights in jail and when released, were told they had to leave the state if they wanted to live together. 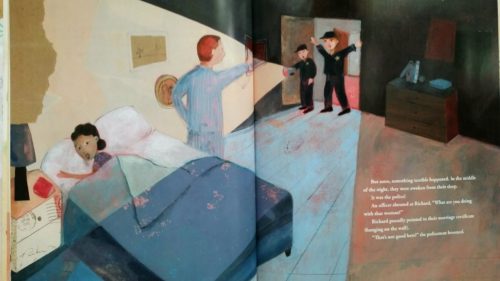 They settled in D.C. and had three children, but they didn’t like city life. They wanted to return to their small town of Central Point to be close to their families. They hired attorneys to help them to fight for what was right. It was the 1960’s and attitudes were changing. People were fighting for equal rights for all. The attorneys worked tirelessly to make the case for interracial marriage. 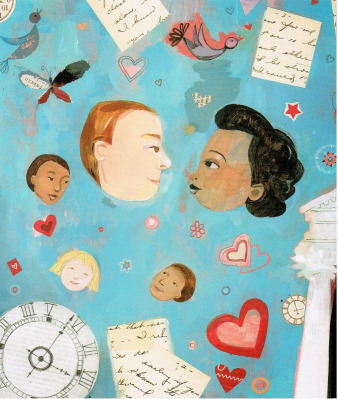 On June 12, 1967, the case of Loving versus Virginia was heard in the Supreme Court. The state argued that blacks and whites must remain separate. The Loving’s lawyers showed that it was unconstitutional to make marriage a crime because of race. The lawyers read a message from Richard: “Tell the court I love my wife, and it is just unfair that I can’t live with her in Virginia.” The court made a unanimous decision and ruled in favor of the Lovings! 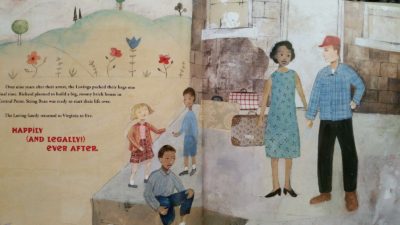 Alko and Qualls are themselves an interracial married couple who created this book as a labor of love. The inspiring story of the Lovings and their courageous fight for justice in an unjust world is well written. Alko was able to take a complex story and make it lively and engaging for children. This is a story of love triumphing over all. The collage style art done by this talented husband and wife is a perfect marriage with the text to provide a springboard for much needed discussions on U. S. history, race, and the right to love. 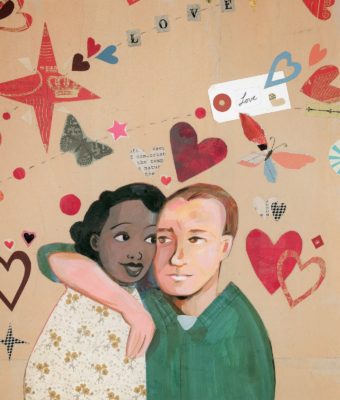 The Case for Loving is recommended for children ages 6-9 but I think it is a book that can inspire readers of all ages. The author’s notes in the back provide further information about their artistic collaboration, historical background,  and resources for students to further explore this important topic.

Loving Day is a day set aside to celebrate the anniversary of the Supreme Court decision striking down laws forbidding marriage between whites and non-whites. You can read about one man’s twelve year quest to establish Loving Day in order to educate people about the importance of the Supreme Court ruling and to celebrate our multiracial population.

In these days of hate speech and horrific acts of terror against people of color, let’s remember the courage and bravery of the Lovings and resolve to work to create a world that celebrates love.

Here is the trailer for Loving which is what will be on our t.v. tonight.