V is for Vietnam

Forty years ago this week United States troops pulled out of Vietnam. There will be many articles, news reports, and ceremonies commemorating this historical event. It is only fitting that during this A to Z Blog Challenge week, we look back and reflect on how this event affected the refugees that fled Vietnam and began their lives again far from their homeland. 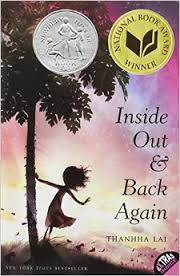 Inside Out & Back Again
By Thanhha Lai
Harper Collins:2011
Ages 8- 12
I am almost embarrassed to admit that this novel-in-verse has been sitting unread on my bookshelf for a number of years. I finally read it as part of the A-Z blog challenge when I was looking for a book set in Vietnam. I am already planning to reread it and savor every perfect word. The book has rightfully received many rewards including the Newbery Honor and a National Book Award.

Inside Out and Back Again is set in 1975 and tells the story of ten year old Kim Ha, who lives in Saigon with her mother and three older brothers. Her parents had fled North Vietnam years before and her Vietnamese naval father, has been missing in action for nine years.  Ha’s life is focused on family, school, and the papaya tree that she tends. But the war is changing their lives. Food is difficult to obtain, schools have closed, most of the Americans have left, and the Communists are coming closer. The family must make the painful choice to leave their home before the government collapses. On the exact day that Saigon falls to the Communists, they are able to flee on a crowded ship where they flounder at sea until rescued by the U.S. Navy. They travel to Guam, Florida, and finally to Alabama. Once settled in Alabama, the family faces prejudice and struggles as they learn to speak English and adapt to a new life.

Inside Out & Back Again is written in first person, narrative verse. It covers one year in the life of Ha as she experiences upheaval but remains hopeful in the midst of change. The book is based on the childhood experiences of the author Thanhha Lai who shares her story in an interview included in the book. This incredible story describes the experiences and emotions of refugees . It is an emotional and beautiful book that needs to be shared so that we can better understand those who leave their homelands and begin again.

You might be interested in this article from The Seattle Times on how the state of Washington and then Governor Dan Evans helped to settle refugees from Vietnam.