Here at A Field Trip Life, many voyages are taken within the pages of a book. Here are three books that will certainly take you places. Bon Voyage! 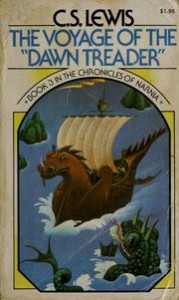 The Voyage of the Dawn Treader”
Written by C.S. Lewis
Geoffrey Bles Publishing, London and MacMillan, US 1952

The third book in The Chronicles of Narnia series by C.S. Lewis, finds Lucy and Edmund staying with their dreadful cousin Eustace. They are drawn into Narnia through a painting of a ship hanging on the wall. The ship is Prince Caspian’s Dawn Treader in is and is on a voyage to locate the seven lost Lords of Narnia. There are numerous adventures and in one, the miserable Eustace has a dragon experience which results in his transformation into a much nicer fellow.
I spent the summer between eighth and ninth grade reading this series and The Voyages of the Dawn Treader was my favorite. These books were my introduction to fantasy and the realization of the many places a person can travel to within the pages of a book.
p.s. The Voyages of the Dawn Treader is now the fifth in recent editions of the series which have been reprinted in order according to Narnian history. This is one of the great classics of children’s literature for a reason and one that every child should read. 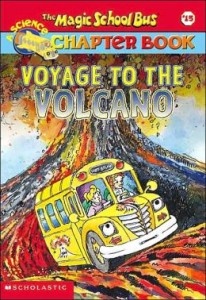 In this chapter book, Ms. Fizzle and her students are learning about volcanoes. When Mrs. Frizzle shows up wearing a dress covered with, the class knows that something is about to happen. Soon, the students are aboard the bus with Ms. Frizzle behind the wheel and are heading into a live volcano! The kids experience a very hot and exciting field trip and narrowly miss being victims of some disastrous events. Of course, they arrive safely back at school after gaining first hand knowledge of volcanoes.
The Voyage to the Volcano is a quick paced and lively book. The dialog is fun and facts are interspersed throughout the story as the students work on reports. The story is vivid and written with kid-like dialog and includes facts written by the students about volcanoes. This is definitely a fun way for students to gain scientific knowledge.
Who wouldn’t want a teacher like Ms. Frizzle? She has an awesome wardrobe and plans absolutely the best field trips. Actually, she is my literary role model. 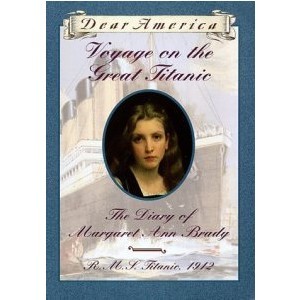 Written as a journal, this book tells the story of Margaret Ann Brady who was left by her brother at an orphanage after their parents died. Her greatest wish is to join him in America. Her dream seems to come true when she is given the opportunity to be a companion to a wealthy lady who will be traveling to America aboard the Titanic.
While there are no surprise endings, this book is well written and the reader is drawn into Margaret’s life. She is awed by the incredible ship and its elegant rooms which she experiences as a first-class passenger. Then, the Titanic hits an iceberg. The description of the disaster through the eyes of a thirteen-year-old girl is heart wrenching. It actually brought me to tears. The epilogue and information about the voyage of the Titanic was well written and makes this book a good book choice.

What is your favorite book that has taken you on a voyage?

« U is for Underground
W is for Water »

I love this idea of reading books set across the d

So excited to share the news that my crew mate Ann