March is Women’s History Month where we pay tribute to fearless women like Susan B. Anthony, Elizabeth, Cady Stanton, and Matilda Joslyn Gage. Wait, you’ve never heard of Matilda Joslyn Gage? Well, there’s a reason for that as you will learn while reading

Born in 1826, Matilda Joslyn Gage had a most unusual childhood. Her father, Hezekiah Joslyn, was an abolitionist as well as a physician. Matilda attended public schools but was also educated at home by her forward-thinking parents. The Joslyns had many progressive thinking visitors and Matilda was included in their discussions. Dr. Joslyn had radical ideas about equality and believed in freedom for all, including women and children. Matilda began to fight injustice at an early age and even carried antislavery petitions throughout her neighborhood trying to convince people to sign them.

Matilda enjoyed reading and studying her father’s medical books. She accompanied her father on his medical rounds and assisted him with procedures including amputation. She had hopes of becoming a doctor like her father, but this was not a possibility for women. In fact, women were excluded from most professions, did not have the right to vote, and once they were married, they could not own property. If widowed, they could be left with nothing and didn’t even have rights to their own children.

Matilda thought that women should be strong and independent. She devoted her life to fighting oppression, not only for women but also for Native Americans and African Americans. Fortunately, she married Henry Gage who believed in and supported Matilda in her work, enabling her to travel, speak, and write. Matilda was a devoted mother to their four children and much of Born Criminal recounts how she managed to have a rich family life while working to convince people that women should be considered equal to men.

Matilda described herself as being “born criminal” because her attempts to exercise her rights as a citizen was considered criminal. In fact, she was arrested for registering to vote and she risked arrest on several other occasions. Matilda worked with Elizabeth Cady Stanton and Susan B. Anthony. Together they became the most important suffragist leaders of the time. Matilda was one of the main organizers for the National Woman Suffrage Association and she wrote tirelessly to promote the rights of women.

She researched women’s history and wrote the book, Women, Church, and State. Together with Elizabeth Cady Stanton and Susan B. Anthony, she wrote History of Women’s Suffrage. Gage and Stanton felt that organized religion oppressed women and together they expressed this opinion in The Women’s Bible.

Author Angelica Carpenter has written a fascinating biography that brings to life a woman who had a crucial role in the fight for women’s rights. She became interested in Matilda Joslyn Gage while researching for her book, L. Frank Baum – Royal Historian of Oz, co-written with her mother, Jean Shirley. Matilda’s daughter, Maud, was married to L. Frank Baum, author of the Oz series of books. They lived for a time with Matilda who encouraged Baum to write his stories down. Carpenter became curious as to why Matilda wasn’t better known. She learned Stanton and Anthony wrote Gage out of the women’s history narrative after her death  because of disagreements about the direction of the women’s movement.

Born Criminal – Matilda Joslyn Gage, Radical Suffragist is the perfect book to read for Women’s History Month. Carpenter has done extensive research and has included maps, resources, photographs, and activities. The book is filled with interesting stories that readers will want to share with others.

Matilda Joslyn Gage’s Home is now a museum where visitors can learn about this amazing woman and her house which served as a stop on the Underground Railroad, a center for the women’s movement, and a place where L. Frank Baum lived with the Gage family for a time. 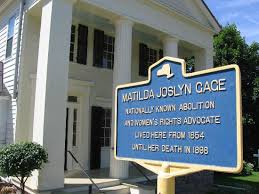 Matilda Joslyn Gage is buried in Fayetteville, New York. Inscribed on her gravestone is her quote: There is a word sweeter than home, mother, or heaven. That word is liberty. 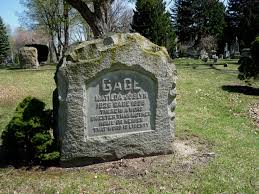 Matilda Joslyn Gage spoke, marched, and wrote wearing the fashions of the time. Here is a link to a Matilda paper doll. Her hair wasn’t blonde, however. Matilda was a brunette until her hair turned gray.