It’s Multicultural Children’s Book Day 2021
#ReadYourWorld
It is so exciting to come across a book that opens you eyes. Thanks to Peachtree Publishing, I am sharing an amazing true story about a man that everyone should know about. 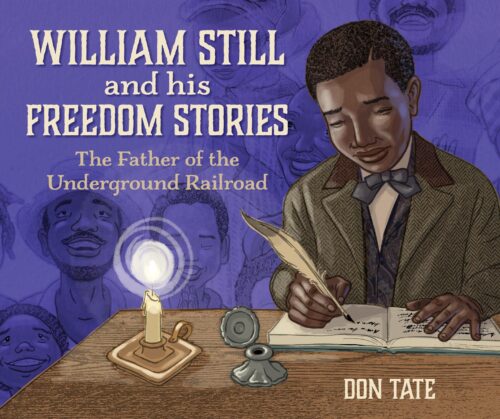 The story begins
at a time when the United States
was split in two.

In the North,
Black people were free.
In the South,
they were enslaved by whites.

Slavery was a nightmare-
Backbreaking work under the scorching sun.
Threats of lashing-or worse.
No pay.

Children were separated
from their mommas and poppas,
brothers and sisters.
Sold away at auction,
never to be seen again.

Don Tate has brought us the story of a remarkable yet mostly unknown American hero. William Still’s father bought his freedom and managed to make it to the North. His mother escaped with his two sisters, leaving two older brothers behind. William was born in freedom but life for a black family was not fair nor easy. William worked and managed to get an education. While helping a runaway slave, William found his life’s purpose. He worked with the Pennsylvania Anti-Slavery Society raising money, planning rescues, and helping former slaves begin their new lives.

One day, a man came to Still’s office trying to find his long-lost family. William realized that this man was his older brother and that there were many others also searching for their families. He began recording details of the men, women, and children he met and was able to reunite families using this valuable information as well as document the black history of this time.

This is an incredible book powerfully illustrated about a brave man who overcame many difficulties and became known as the “Father of the Underground Railroad.”

WILLIAM STILL and HIS FREEDOM STORIES: Father of the Underground Railroad should be required reading for every American.

MCBD, a celebration of the diversity of kidlit, was founded by Valarie Budayr and Mia Wenjen and is back for its eighth year and I am excited to be supporting the mission of MCBD which helps parents, teachers, librarians and students by increasing awareness of the need for diversity in children’s literature. Publishers and authors generously share their diverse and own voices books so that people like me can share them with people like you. For more information and to join the MCBD Twitter party check out the links I’ve included.

MCBD 2021 is honored to be Supported by these Medallion Sponsors!

MCBD 2021 is Honored to be Supported by our CoHosts and Global CoHosts!

MCBD 2021 is Honored to be Supported by these Media Partners!

Check out MCBD’s Multicultural Books for Kids Pinterest Board!