Multicultural Children’s Book Day is a day set aside to celebrate the importance of diversity in the books written and shared with children. For many years, books with characters from different cultures, ethnic groups, and religions have been difficult to find. That is changing, however, as authors, publishers, librarian, and teachers seek out books that share the broad range of diversity for young readers. January 2017 marks the fourth anniversary of Multicultural Children’s Book Day which is organized by bloggers Mia Wenjen of Pragmatic Mom and Valerie Budayr of Jump into a Book. Becky Flansburg of Franticmommy is the awesome project manager. They have worked tirelessly to get more diverse books known and into the hands of children.

I am excited to be participating for my third year and today am sharing a book that I believe is very important.

Girls deserve an education as much as boys do but, unfortunately, in many parts of the world, girls have limited access to schools, books, and learning. Malala Yousafzi is a young woman who has dedicated her young life to provide girls with access to learning. Her story continues to inspire people all over the world. I am excited to share a wonderful picture book that is perfect way to introduce the youngest Nobel Peace Prize winner to young readers. 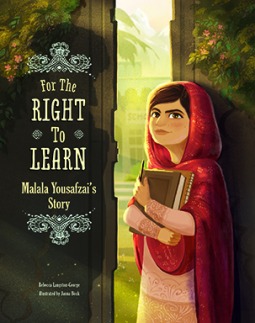 For the Right to Learn: Malala Yousafzai’s Story written by Rebecca Langston-George and Illustrated by Janna Brock. Capstone Publishing 2015.

Malala grew up in Pakistan near the border of Afghanistan. Her father was a school principal who believed that girls, as well as boys, should receive and education. Malala loved school, studied hard and became fluent not only in Pashto, her native language, but in English and Urdu as well. 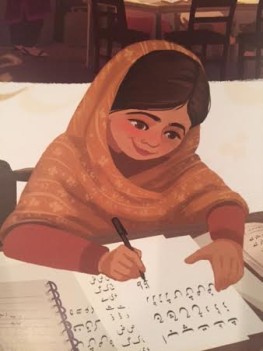 Unfortunately the Taliban moved in to the area and forced their ideas upon the people who lived there. The Taliban didn’t believe that girls should attend school with boys. In fact, the leaders believed that girls who attended school brought shame to their families. Malala and her father disagreed. Eventually, they ordered girls’ schools to be closed and they were destroyed by bombs. 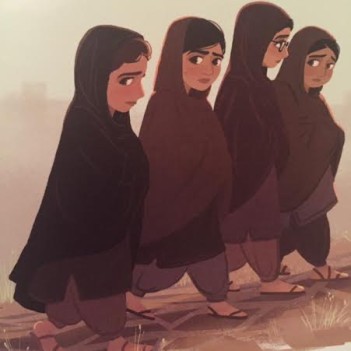 Malala continued to speak out for the right of girls to be educated. Under an assumed name, Malala began a blog through the BBC. She read her post over the phone to a British reporter who published it. The blog caused an uproar and the Taliban agreed to let girls ten and younger go to school. Because Malala was eleven, she dressed like a younger girl and went to school. Because Malala had become well known, she was targeted by the Taliban. One day, men stopped the school bus that carried Malala. They identified her and shot her as well as two of her friends. 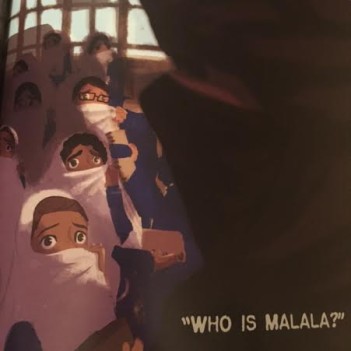 Word spread and people around the world began to pray for Malala. Malala was flown to England where she recovered after many months and numerous surgeries. She continues to speak out for the rights of all children to live in peace and to receive an education.

In this well written book, Rebecca Langston-George not only shares Malala’s  bravery and determination, but she handles difficult topics such as extremism and violence in a way that is understandable to young students.  The illustrations perfectly convey the passion of Malala and show the struggles of the people who have been terrorized by the Taliban.

For the Right to Learn is the perfect book to use as a springboard for discussion. The book introduces a part of the world that is unfamiliar to many children. It will help children to understand that education is not  a given for everyone and it shows how even a young person can stand up for what their beliefs and fight for the rights of others. 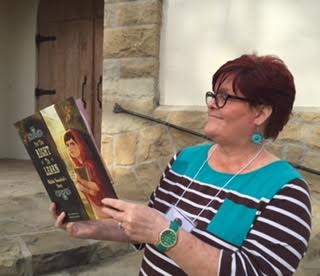 I had the privilege of hearing Rebecca share the journey of writing Malala’s story. She was inspired by Malala Yousafzai and was thrilled to have the opportunity to write about the life of this brave young woman. As the book was about to be printed, Malala was awarded the Nobel Peace Prize. Fortunately, the publisher was able to hold the printing so that the book could begin with Malala speaking at the award ceremony on December 10, 2014, becoming the youngest Nobel Peace Prize winner. 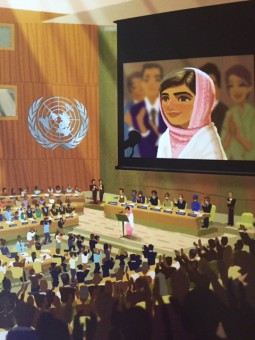 Here is the beginning of Malala’s acceptance speech for the Nobel Peace Prize:

Malala is wise beyond her years. She speaks eloquently on peace, bravery, and the right to education for girls.

“One child, one teacher, one book, and one pen can change the world.”
-Malala Yousafzai

I would like to give a special thanks to @Capstone Publishing for sending me this beautiful book to review and also for publishing great books for children that feature a broad range of diversity.

Multicultural Children’s Book Day 2017 (1/27/17) is its fourth year and was founded by Valarie Budayr from Jump Into A Book and Mia Wenjen from PragmaticMom. Our mission is to raise awareness on the ongoing need to include kid’s books that celebrate diversity in home and school bookshelves while also working diligently to get more of these types of books into the hands of young readers, parents and educators.

Despite census data that shows 37% of the US population consists of people of color, only 10% of children’s books published have diversity content. Using the Multicultural Children’s Book Day holiday, the MCBD Team are on a mission to change all of that.