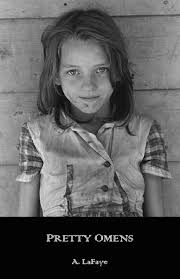 Pretty Omens written by A. LaFaye

Published by Anchor and Plume Press

Under a full moon on Crowley Ridge, Cass Anne Marie was born to Mama Sela who had already lost three children. She and her husband loved that baby but when winter came with bitter cold, Cass Anne Marie came down with a fever. When it looked as though her daughter would not survive, she prayed and called her child back. The local people in this area of Appalachia thought that the mother had made a deal with the devil and shunned the child. She was not allowed into the church or into the fellowship of the community.

Pretty Omens is a novel written in verse. I must admit, I read it twice. The first time I rushed to find out what happened to Cassie Anne Marie. The second time I read it slooowly relishing each and every word and beautiful phrase.  This verse describes how the winter affected the people;

As Cassie grows up, the realization comes that she can see things before they happen. The root woman who lives in the woods who helps Cassie to understand the gift she has been given even though others think she is evil.

I seen it.
Drew it.
Knew it to be so
‘fore it happened.

Cassie does good things in secret for these people who treat her so cruelly. When Cassie sees a rabid dog  she protects the child from being bitten but then is accused of killing the dog. She sees a girl who is drowning but then is blamed for her death. Finally, she sees a collapse in the local mine which threatens the lives of many of the men who have shown such hate toward her.

This novel is so beautifully written that I held my breath as I read. The spare but elegant language fits the story well. I encourage you to read this book and savor it verse by stunning verse. Pretty Omens would be a wonderful choice to read with middle school students not only for the descriptive language but also as a springboard for a discussion on how mistrust and hate can cause people to act in terrible ways and that good will triumph over evil.