Most people are familiar with the story of a beachcomber who encounters a child on the beach surrounded by starfish. The child is tossing starfish one by one into the ocean. The beachcomber asks the child why he is bothering to toss starfish back since there are so many it won’t make a difference. The child replies, while tossing a starfish into the ocean, “well, it makes all the difference to this one.”

Walking on Cayucos beach recently, we found the beach covered with hundreds of sand dollars. An extremely high tide followed by a very low tide resulted in numerous sand dollars stranded on the beach. Many had died but we found quite a few still alive. Although the original intent had been to exercise, the walk turned into a rescue operation. We scooped up as many live sand dollars as possible and returned them to the sea. Did we save them all? No, but I like to believe we made a difference to a few.

Sand dollars are marine animals with hard bodies covered by short dark purple spines (top). They are echinoderms and are related to starfish and sea urchins. Sand dollars live on the sandy sea floor. The white sand dollars found on beaches are actually the skeletons of sand dollars (bottom).

Have you ever rescued a sea animal you’ve found on the beach?

For more information about sand dollars take a look at
http://echinoblog.blogspot.com/2012/03/sand-dollars-are-sea-urchins-please.html 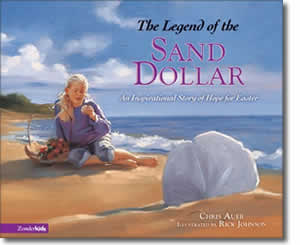 The Legend of the Sand Dollar is a fitting picture book for the Easter season as it uses a sand dollar to explain the story of Christ’s suffering and resurrection.
Written by Chris Auer and illustrated by Rick Johnson Zonderkidz ages 4-8