Today is the final day of Hispanic Heritage Month which began on September 15th. To celebrate I’d like to share the latest novel-in-verse by Cuban-American author, Margarita Engle. 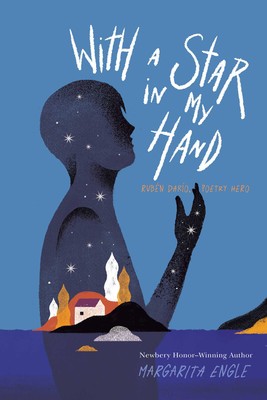 With a Star in My Hand – Rubén Darío, Poetry Hero
Margarita Engle
Simon and Schuster (release date: 2/28/20)
Historical Fiction in verse for ages 12 and up

I first heard of Rubén Darío when I traveled to Nicaragua and saw statues and paintings of the poet in every city, town, and village I visited. Nicaraguans are proud of their national poet and many streets and buildings are named in his honor. Nicaraguans recite his poetry and people all over Central and South America and Europe have been inspired by his words.
Thankfully, Margarita Engle has written a novel-in-verse to introduce Rubén Darío, the father of the literary movement known as Modernismo.

Abandoned by his mother as a child, Rubén Darío, was raised by his great uncle, El Bocon – Big Mouth and his wife, Bernarda. His childhood was filled with stories told by his uncle, the cook, and the priest yet he desperately wanted to know his own story. We learn of his beginnings as a child poet-

Math, geography, and grammar
Also have their orderly place in my school day,
But poetry arrives in its own way,
Wild like a hurricane,
A storm of turbulent wind
And ocean waves!

Margarita’s beautiful verses flow on the page bringing this poet to life who, as a twelve-year-old, sold his poetry for treats, tickets to the circus, and money. When he was published in a newspaper, he became known as el niño poeta, the boy poet. Margarita’s poems describe the abandonment, betrayal, revolution, illness, love, work, and travel that contributed to the making of Rubén Darío. His poems have touched people all over the world as he became a voice of truth and inspiration and changed literature written in Spanish.

I hope that With a Star in My Hand will be widely read and shared and that a new generation of poets will be inspired by both Rubén Darío and Margarita Engle.

I was able to read With a Star in My Hand on the beach in Nicaragua not far from the birthplace of Rubén Darío. 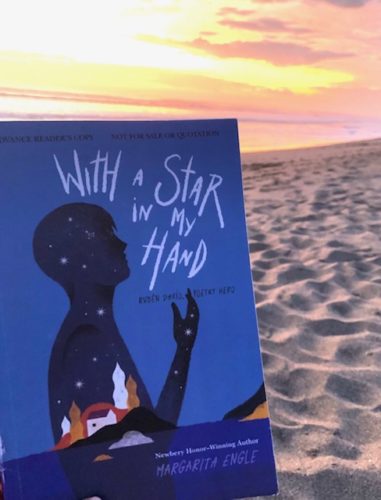 My daughter lives with her family in Masaya, Nicaragua. This poem is displayed in a park near their home. 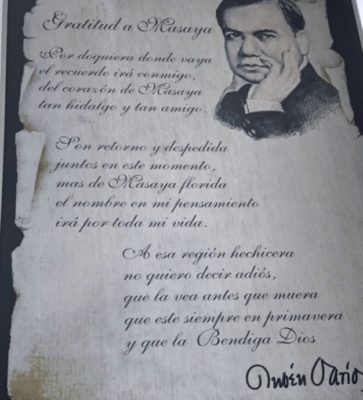 My friend, Elianor, with books by Margarita Engle in the library at the Student International education site in Nindri, Nicaragua. 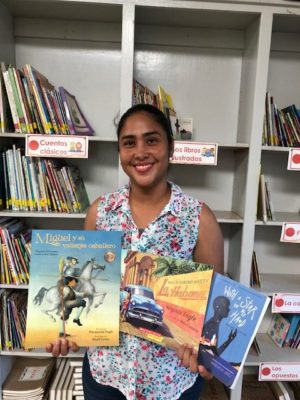 Margarita Engle is being honored with the Neustadt Prize. Link here to learn more about this amazing poet, her writing, and the prize.

(I was given an advance reader’s copy of With a Star in My Hand for an unbiased review.)