It seems that a number of libraries were built by wealthy men. I grew up near the Huntington Library and went there often. My mother took me to look through windows as scholars in white gloves turned the pages of old manuscripts. She was in awe and so was I even though, at the time, I didn’t really understand the importance of the collection. 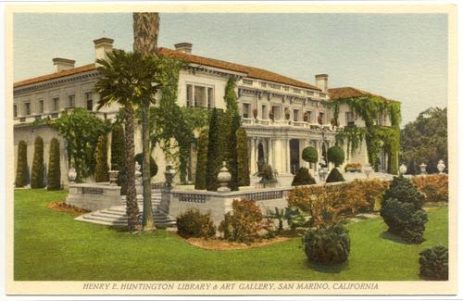 The Huntington Library was founded in 1919 by railroad magnate Henry E. Huntington and his wife, Arabella. Huntington had an interest in books, art, and gardens. He amassed one of the finest research libraries in the world, established a grand art collection, and developed an amazing botanical collection from all around the world.

The library has rare books, manuscripts, maps, and graphic materials focusing mainly on British and American history and literature. The materials are available to qualified scholars. Some of the most important items include a manuscript of Chaucer’s Canterbury Tales, a velum Gutenberg Bible, a folio edition of Audubon’s Birds of America, and early editions of Shakespeare’s works. They also have a world class collection of materials devoted to the settling of the American West. 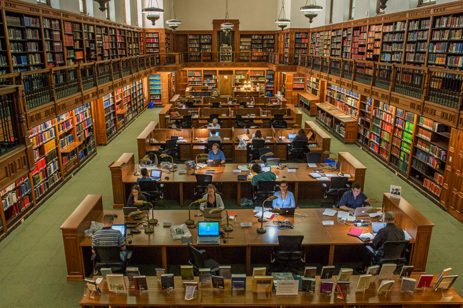 Manuscript of Geoffrey Chaucer’s The Canterbury Tales, ca.1410. Shown is the introduction to “The Knight’s Tale.” 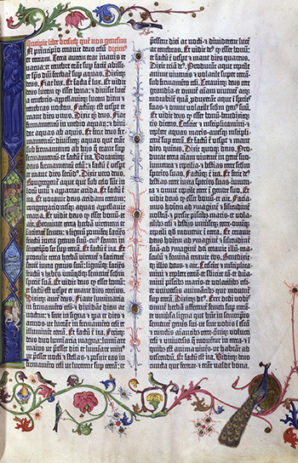 This place is absolutely beautiful and worth a visit if you find yourself in Southern California. I have been there dozens of times and try to go back as often as possible. When you go, give yourself time to wander through the gardens (this is me with my field trip buddy Amy) 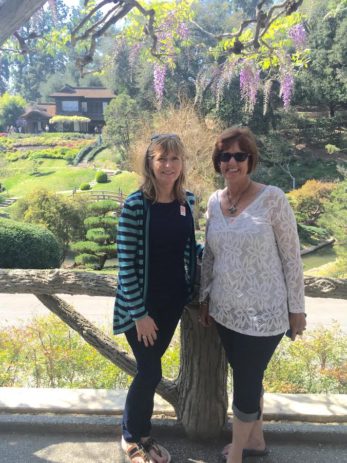 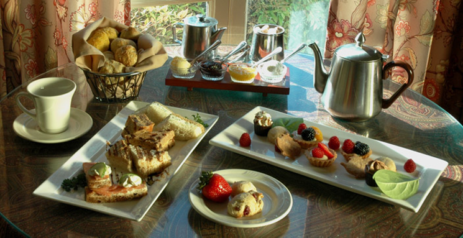 Another wealthy man, newspaper magnate William Randolph Hearst, built himself a “vacation home” on the California Central Coast in San Simeon. Known as Hearst’s Castle, the mansion was designed by architect Julia Morgan who managed to incorporate the vast collection of art that Hearst had shipped in from all over Europe. 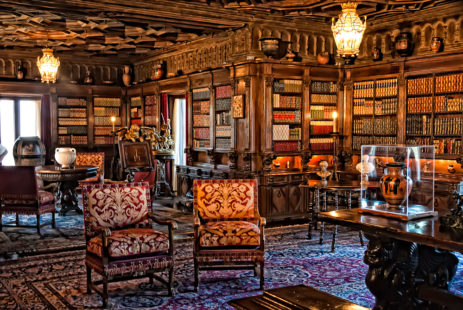 The library has over 4,000 books alongside 150 vases from ancient Greece. The library wasn’t large enough for his collection, however, so there are another 3,00 in his Gothic study, and even more books shelved in other rooms such as the movie theater. I wonder if anyone even gets to read the books that are there?

Speaking of castles and since today’s letter for the A to Z Blog Challenge is H, I’d like to suggest you visit the blog of author Evelyne Holingue, who is also participating in the challenge this year. Growing up in France, she was fortunate to live near a library housed in a castle. She spent many happy hours in this castle and went on to write a young adult novel, Chronicles from Chateau Moines, in which the castle is prominently featured. 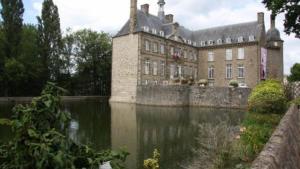 Evelyne is writing this year about French authors from A to Z. Please visit her blog– you will be charmed, learn a lot, and feel like you have spent a bit of time in France.