I’m excited that Susan Hill’s Perfect Picture Book Friday link up is back in business. I have a perfect picture book to share today.

Opening: Aiko Asawa runs between rows of tomatoes and peppers on her parents’ Southern California farm. She stops to look at a dragonfly and the colors and patterns of its see-through wings. She studies spider webs and dangling fruit.

Her toes touch the ground as her legs dangle over the edge of a horse-drawn leveler. She uses her toes to draw and delights in making wavy lines and hourglass shapes.

Brief Synopsis: Aiko Asawa was a Japanese-American artist who began drawing and painting as a young child. Ruth, as she was known outside of her home, attended Japanese school on Saturdays and learned about the importance of empty space as she practiced calligraphy. Unfortunately, as a child during World War II, she and her family were forced to leave their farm and live in an internment camp. Even there she continued to make art with whatever materials she found including denim, tin cans, and rocks.

Eventually Ruth was allowed to attend college where she trained to become a teacher. She traveled to Mexico and learned from artisans to work with wire. She began making large sculptures which hung from the ceiling.  The looped structures were shown in museums and galleries where their shadow shapes on the walls became part of the art.

Believing that “art is for everyone,” Ruth went on to start an art school. She was commissioned to create fountains and became known as the “fountain lady of San Francisco.” Her final commission was the Garden of Remembrance at San Francisco State University which honors the Japanese-Americans sent to internment camps.

Why I love this book: This book is a wonderful introduction to Ruth Asawa and her artistic legacy. Her generosity and philosophy continues to inspire everyone who learns about her art. I have passed the fountains in San Francisco and never knew their history and am now taking a much closer look at each one. It is important to learn about how individual people and families were impacted by the dark history of internment and Ruth Asawa – A Sculpting Life is a perfect introduction.

If you find yourself in San Francisco on September 28th, you will want to attend the celebration of Ruth Asawa’s art at the M. H. de Young Memorial Museum. In addition to viewing the sculptures, author Joan Schoettler will be reading her book and leading a sculpture activity based on Asawa’s Milk Carton Sculpture Workbook. This is a free event. 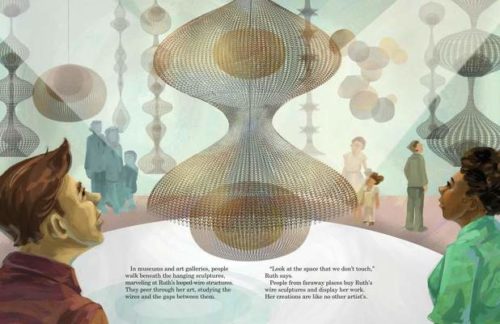 If you are unable to go to San Francisco, you can learn more about Ruth Asawa and her art at the de Young museum.

Ruth Asawa was recently honored with a Google doodle! 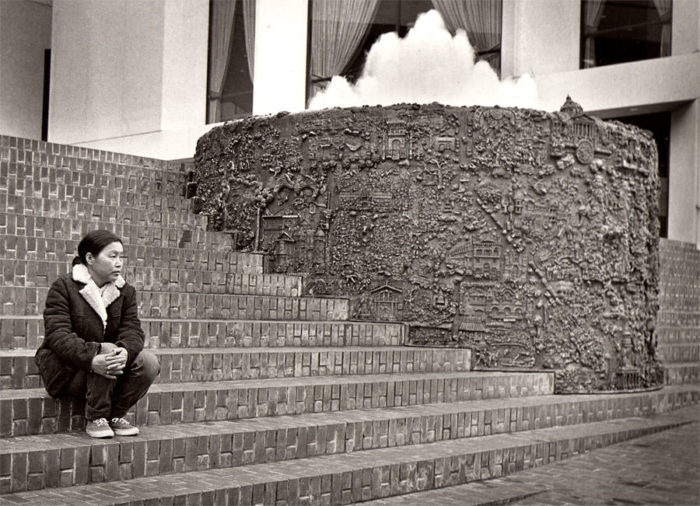 Ruth Asawa next to the San Francisco Fountain in 1973 subject to copyright ruthasawa.com