Everyone knows the story of the RMS Titanic and how she sank on her maiden voyage on April 14, 1912. There are movies, documentaries, songs, and many books which tell the sad tale. For today’s A to Z blog post, I’d like to share and alphabet book about the Titanic. 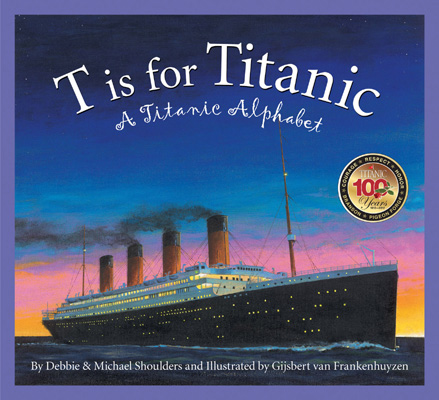 A is for Anatomy of the Titanic
The RMS Titanic
included ten decks in all
It was the world’s largest moving
object at 175 feet tall.

This is a well-researched, historically accurate account of the ship’s short-lived journey. For each letter of the alphabet, information is given about a different Titanic topic. For instance, I is for iceberg which we know was a problem. And, for the letter V, we learn about the violinist who played to keep passenger’s fears at bay. This is not an alphabet for young children learning the alphabet but it will be of interest to older children fascinated with the facts surrounding the Titanic.

R is for Rescue
As the Titanic went down
away from view,
the nearby Carpathia
helped in the rescue.

Unfortunately, I think some of the rhyming text is a bit forced but the facts and information are interesting and well written. This book is a great example of  the thematic alphabet books which Sleeping Bear Press does so well.

T is for Titanic – here’s a video you may enjoy:

« Sleepy Alphabets for Bedtime
Under and Upside-down Alphabets »