It seems that wherever there is water there have been mermaid sightings. In Ireland, the Merrow as they are known, have been a part of seafaring lore for centuries.

According to Irish legends, the male merrows are friendly fellows who like to have a bit of brandy from time to time. They are not attractive as they are said to have green bodies, green hair, and green teeth. They have eyes like pigs, scaly legs, and arms like fins. 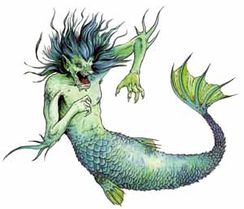 The female merrows are also called mermaids. They are graceful and beautiful with the tail of a fish and a bit of webbing between their fingers. They are known to wear a red cap which plays a large part in many Irish mermaid stories. They are said to be wild in the sea, teasing sailors and singing irresistible siren songs. Mermaid sightings were considered bad omens for their presence foretold the coming of a storm. When a sailor didn’t return from the sea it was said that they “married a mermaid.” 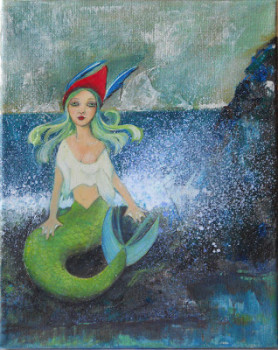 If an Irish man chanced upon a mermaid and captured her red cap, she would forget about her past and marry him, becoming a quiet and obedient wife. If she found the cap and put it back on, she would remember her past and return to the sea, leaving her husband and family behind. 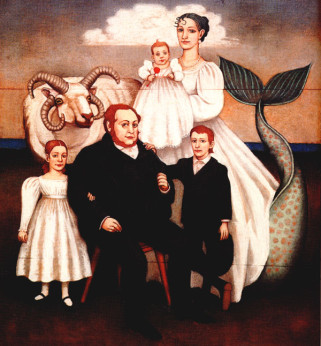 This image was painted by artist Troy Howell for the book Mermaid Tales from Around the World retold by Mary Pope Osborne. You can read The Enchanted Cap here.

Did you know that an Irish mermaid became a saint? According to legend, Li Ban was a princess who survived a great flood. She lived for a year with her dog in a cave. When they ran out of food, she prayed to God to turn her into a salmon. Her prayer was partially answered as she became half fish, half human. Her faithful dog became a sea otter. After 300 years, they were discovered by some monks and she was baptized and given the name Murgen, or ‘sea-born.’ When given the choice to remain a mermaid or to die and go to heaven, she chose the latter. 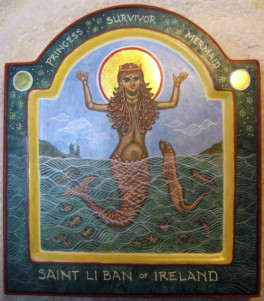 Have you ever read any Irish mermaid tales?