RAILWAY JACK – The True Story of an Amazing Baboon

A review and chat with debut author KT Johnston 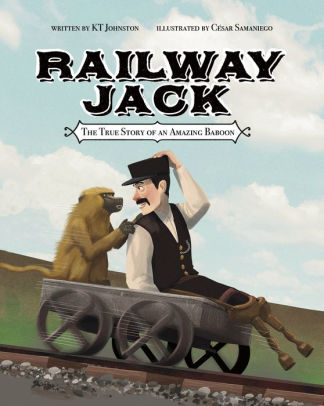 I am so excited to be sharing the first picture book launched by a member of the 2020 Debut Crew!

From the back cover:
“What is that baboon doing?”
Train passengers who pulled into South Africa’s Uitenhage Station in the 1880’s were in for a surprise. A worker named Jack was running the switch that sent each train down the right track. But Jack was no ordinary worker- he was a baboon! Jack was there to help a man named Jim, who had lost his lower legs in an accident. Jim had trained Jack to run the switch. But could Jim convince the railway authorities that a baboon could be trusted with something so important?

Jim Wide was a railway guard in South Africa during the 1870s. Unfortunately, he lost his legs in a railway accident and was no longer able to inspect trains. He made himself wooden prosthetic legs and convinced the railway to continue to employ him. He became a signal man and with creative persistence, he made a specialized cart and was able to do his job. But there were things that were difficult to do and he continued to look for solutions. That’s when he met Jack, a baboon that helped a man leading a pair of oxen. Recognizing the baboon’s intelligence, Jack made a deal with the man and became the owner of a baboon. Jack was a quick learner and soon was helping with everyday chores like pumping water and cleaning. Jack’s strength and intelligence made him an invaluable ally for Jim as a coworker and friend. Together they astounded travelers and gained the confidence of the railway authorities.

C: Well, the big day has finally arrived – your debut picture book is now out in the world!

Tell us a bit about how you came to be a writer and how long you have been submitting books?

KT: I started writing about six years ago after my kids had fledged the nest and I was searching inside myself for something to fill the void. I was discussing with my daughter the interesting 2nd person perspective in Aura (by Carlos Fuentes), a book she’d been assigned in Spanish Lit. The craft of writing energized me and she said, with an excessive level of enthusiasm, “Maybe you should write a book yourself!” No doubt her motivation was not so much to help me find something fulfilling to occupy myself with than to distract me so that I wouldn’t keep telling her how much I missed her. And that is how writing started for me. As I roamed my way through my first project, at one point I was trying to remember the name of my high school Creative Writing teacher, and in my box of high school memories, along with my Transcript, I found a stack of stories I’d written as a child and forgotten about. So I guess it’s always been there waiting for me to come back to it. I sent my first query out almost five years ago (a book for adults), with no nibbles on that project, nor the one after that (also for adults). JACK is the 3rd project I queried.

How cool that you found your childhood stories! Can you tell us a bit about the inspiration for Railway Jack and how you went from idea to published book?

KT: I follow history-related sites, well, because I find history interesting! Jack’s story just flowed into my Feed one day and got stuck in my head. It’s strange how as the days went by, it started taking up more and more space in my thoughts. One day, when I was having coffee with a couple literary friends, I told them about it and joked that maybe it would be my next book (since the one I was querying at the time was getting nowhere). One of them commented it would make a great children’s book. Well, I went home and drafted my first picture book—and guess what? He was right.

C: You did so much research to write Railway Jack. How did you decide what to include and what to leave out?

KT: I will leave something out if I can’t corroborate it with a contemporary or reasonably credible source(s). But as author Angus Donald said, “Research is sweat and toil, but when you’ve unearthed a nugget, resist the temptation to shoehorn it in just because you bled for it.” The biggest deciding factor for me is that the arc needs to be purposeful and aesthetic and the story has to flow. After all, readers who turn to JACK will be there for the story.

C: I love learning about companion animals but I am always so sad when they die. I appreciate that you save that for the Author’s note. Actually, I found your back matter to be incredibly interesting. Did you decide what to include or did your publisher, Capstone Publishing, give you guidance?

KT: The circle of life is so bittersweet, isn’t it? But if we didn’t have death we wouldn’t have life. It might actually be our ultimate gift to our animal friends, to have the opportunity to nurse and mourn them in order to save them from mourning us, something they may not be able to understand.

Prior to talking about back matter with my editor, I had ideas for what parts of Jack’s story I wanted to expand on and provide further learning about. My editor made some additional suggestions for material she thought would be suitable for this book as well as fit with Capstone’s past collection. So it was a little of both.

C: Here are some quick questions-

What book is on your nightstand?

KT: Book? As in one? Well there’s a few J: a genealogy treatise on my Studebaker side; an old slightly tattered book from a friend left over from her parents’ estate sale (“Who wants someone’s old book?” she said. “This one made me think of you.” What could be more precious?); two that I may write picture books about; the true story of a man I met who used to run a gang in Minneapolis and everything in my Kindle.

C: What do you always carry in your backpack, (purse, book bag, basket – you choose)

KT: Other than the staples (phone, wallet, keys…), my Kindle goes everywhere I might have waiting time.

C: Where in the world would you like to go?

KT: So many places!! Places I’ve been to and loved beg me to come back, but there’s so many more I haven’t seen yet! OK, I’ll pick one & put it this way: I’d like to see old Prague next.

KT: I have another picture book coming out with Capstone in 2021! Another true story, this one about an early therapy animal. I’m midway through first draft on a third, and I have some rough research notes on several more stories I’d like to tell. 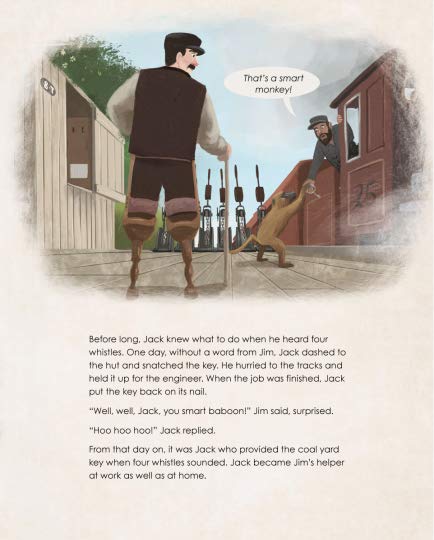 Five reasons I love this book:

KT Johnston writes historical narrative nonfiction. KT’s interest in the past developed from a sweeping curiosity about the way things were and how history has impacted the way things are. She enjoys feeding her interests by traveling, whether she’s touring a historical site, experiencing a foreign land, or mind-wandering in a good book. Born in Minnesota, KT earned a degree in biology and conducted wildlife studies before settling into a corporate career as an analyst. KT hopes to inspire others to be curious about our world as well, one true story at a time.

KT Johnston is a fellow member of the 2020 Debut Crew whose purpose is to help each other promote their debut picture books. I am looking forward to sharing books written by the crew throughout 2020 as our books are released. For more information about the 2020 Debut Crew and their books go to:https://2020debutcrew.weebly.com/