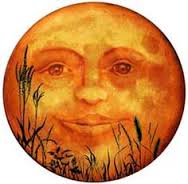 Field trips that can be taken near home often are the best ones. They are usually inexpensive and don’t require a lot of planning. Tomorrow night you can take the perfect field trip just by walking out your door and looking up. There will be a super moon lunar eclipse and that is reason to celebrate.

Native Americans named the full moon of each month. This one was named the Corn Moon since corn was ripe and ready to be harvested.

The full moon closest to the autumn equinox is also known as the Full Harvest Moon because farmers can harvest their crops late into the night by the light of the moon.

To watch the Super Moon Lunar Eclipse head outdoors as soon as it starts to get dark. Here in the Pacific Time the full eclipse will be at 7:11 p.m. I will be viewing through binoculars but you will be able to see the eclipse without them.

For more information take look at this article on the Sky and Telescope website.

Of course I have some great moon books to share:

Goodnight Moon by Margaret Wise Brown (author) and Clement Hurd  This treasured classic is #1 on the list because so many children have been charmed and have bedtime memories based on the great green room, the red balloon, and the old lady who whispers “hush.”

Kitten’s First Full Moon by Kevin Henkes (author and illustrator) is a new classic  that should be read to children at bedtime. It tells the story of a kitten who sees the moon and thinks it is a bowl of milk. The illustrations are soft and gentle. It is such a sweet story – you can’t help but sigh contentedly as you turn the last page.

When I was a child riding home in the car on a moonlit night, I always thought that the moon was following me. I later learned that I wasn’t the only one with this idea. In, I Took the Moon for a Walk by Carolyn Curtis (author) and Alison Jay (illustrator), a boy notices the moon following him. he decides to show the moon the many things that are out at night.

If You Decide to Go to the Moon by Faith McNulty (author) and Steven Kellogg (illustrator) is a good example of fun nonfiction. It explains facts about space travel that a child would want to know including what to take, what they would see, and most importantly, how to get back home.

One of the first people I saw in concert was Van Morrison and every time there is a full moon I think of the song, Moon Dance. I think this month’s super moon will be a marvelous one to dance under.

This post is part of a link up that Ruth Ayres created to encourage bloggers to share the things in their lives worth celebrating. Visit her blog, Ruth Ayers Writes to share in the celebrations.

« Celebrating the Giant Sequoia Trees and the firefighters working to save them
What would the world be like if oak trees didn’t exist? »